Big pharma drove M&A value in the life-sciences field to a record high in 2019. That record is likely to remain standing, at least for 2020, but companies still face pressure to strike deals, according to an annual report on M&A by professional services firm EY (Ernst & Young).

Biotech companies face challenges in growing revenue; big pharma companies will look to shed non-core therapy lines; and pharmaceutical firms may be eager to snap up cell and gene-therapy companies, according to the 2020 EY M&A Firepower report.

Companies also could feel a need to invest more in data-driven and digital technologies, the report said.

If they decide to pull the trigger, buyers have plenty of capital, according to the report. Life-sciences companies are sitting on more than $1 trillion in capital that can be used for deals, a metric that EY refers to as firepower.

But while the values were high, deal volume was down 14% from 2018, the report said. EY attributed the drop to a gap between what buyers want to pay and what sellers expect to get — a gap that is at a longtime high.

“This difference may have made would-be acquirers hesitate to advance their strategic priorities,” the report said 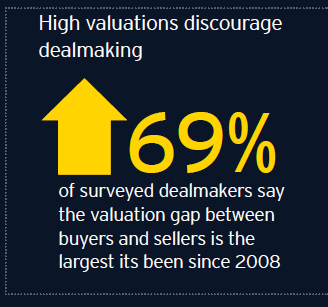 Medtech and biotech companies largely remained quiet, according to the report. And outside the biggest deals, M&A activity was conventional: Companies bought products or services that were on the market, or close to being on the market, and that matched their strategic priorities.

The focus on products, however, carries risks, the report said. Companies may be focusing too heavily on therapies that don’t stand out from the competition and missing out on opportunities to invest in data-driven and digital technologies.

“This contradiction means many companies are under-resourcing the capabilities that will help demonstrate real-world utility precisely when patient outcomes, clinical efficiency and cost measurements become even more central to the value proposition,” according to the report.

What to expect in 2020
While EY anticipates lower M&A value in 2020, the year will not be a quiet one. The firm — which considers the annual benchmark for deal value to be $200 million — sees several factors spurring action in 2020.

Big pharma companies may hesitate to strike mega-deals. But they will continue to discard therapy areas they no longer want to focus on – or where their market share is too small to compete. Sanofi, for example, announced in December that it was dropping research into diabetes and cardiovascular products to focus on vaccines, oncology and other growth areas.

“Executives at these companies are confident about their organic growth prospects and prefer to supplement revenue through smaller deals,” the report said. “They are convinced that large deals destroy shareholder value either because buyers overpay or because megamergers result in a poor strategic fit that limits upside.”

As bigger companies spin off existing products in order to focus on their growth areas, it could create opportunities for private equity investors, the report said.

“We have multiple pockets of capital available to invest in health care businesses, regardless of the stage and maturity of the assets,” Julie Kahr, senior managing director for The Blackstone Group, wrote in a sidebar to the EY report.

Biotech companies, meanwhile, likely will need acquisitions to kickstart growth, the report said. Cell and gene therapy startups could be the targets – in part because they offer transformative approaches but also because they are familiar as products. Buyers can rely on traditional methods to calculate values and they know how to sell them, the report.

Digital technologies are less familiar, and that is one reason life-sciences companies have held back as buyers, the report said. “Longer term, however, companies will need to make digital tools a focus if they are to realize the possibilities in personalized health that cell and gene therapies have revealed.”

What about medtech and digital health?
In 2019, medtech companies largely stuck to smaller deals that added depth in specific therapeutic areas, the report said.

They also engaged in what EY expects to be a trend in 2020: partnerships that open up opportunities to customize therapies and services and tap into innovative intellectual property.

Examples include GE’s alliance with Roche to integrate in vivo imaging and in vitro laboratory data and Medtronic’s partnership with Viz.ai to distribute the latter’s stroke-detecting artificial intelligence tool.

“These partnerships are still too small in scope to position medtech companies for growth. But 2019 also demonstrated that when medical technology companies see nearer-term opportunities, they are willing to pay to own them outright,” the report said, citing Medtronic’s purchase of Mazor and the Siemens Healthineers acquisition of Corindus Vascular Robotics.

Partnerships are one way companies move closer to mergers, the report added. A quarter of the so-called bolt-on transactions in 2019 were between companies that had been partners, up from 11% in 2015. Bolt-on deals are small or midsized acquisitions that represent less than 25% of the buyer’s market capitalization, according to EY.

“This ‘try-before-you-buy’ attitude isn’t surprising and may alleviate cultural fears for both the buyers and sellers,” the report said. “It may also help reduce execution risks. In the past, bigger biopharmas have lost value by acquiring platform technologies too early — either because they weren’t able to integrate the innovative company into their corporate structure or because developing actual therapeutics proved more difficult than anticipated.”

Survey: 42% of Americans may not go back to in-person care this year

How to Do the Cable Crunch for Ab Strength and Size