Digital health technology, or health tech, companies had quite a year in 2017. It was a record-setting year for funding, according to a year-end 2017 report by venture fund Rock Health (see Figure 1 below) that revealed some key insights into the sector including:

Impressive numbers, for sure, but not all news was as positive. The size and number of large, late-stage health tech deals appeared to be leveling off. Exits were down 18 percent in 2017, and all were due to mergers or acquisitions. Maybe most surprising, 2017 saw no health tech company IPOs. These last findings led Rock Health to indicate that “for now, M&A is the new digital health IPO.”

Yet perhaps the lack of IPOs isn’t that surprising after all. Despite growth in the US stock markets, company executives and investors could be waiting until uncertainty in the US legislative and regulatory environment evens out, especially given efforts to repeal and replace the Affordable Care Act (ACA) and other initiatives of the new administration’s first year.

At the same time, consolidation in the broader health care industry continued among health care provider organizations, health plans, and life sciences companies including pharmaceuticals, biotechs, and medical device companies. Convergence between those sectors continued as well, with traditional and non-traditional health care players expanding their industry footprint to gain economies of scale and control more of the continuum of services to health care consumers. 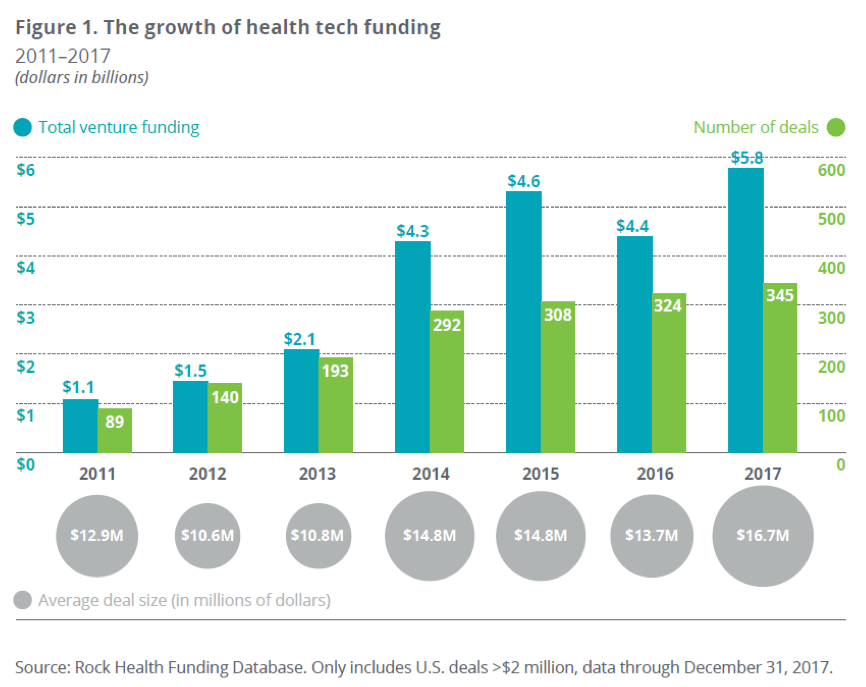 An environment ripe for disruption

That ongoing consolidation and convergence, along with three other “Cs” that are driving disruption in the industry (Consumerism, Cost, and Compliance, see sidebar “The five Cs of disruption” on page 5) still leave what is often called “white space” or opportunity in the industry as incumbent companies often focus more on reorganizing and less on technological innovation. It is in that white space that well-funded health tech companies keep appearing, fueled by the expanding flow of private equity and venture capital funding. Consider that in almost all of the US metro areas that are hotbeds of health tech company development, the number of funding deals at least doubled between the first and second half of 2017 (see Figure 2 below).

Health tech companies, much like their cousins in other industries including energy and resources, financial services (Fin tech) and Insurance (Insure tech), are shaking up longstanding business models and methods of health care, as well as sources of and ways of accessing information. It’s important to understand why this disruption is occurring and what investment dynamics are fueling health tech’s growth. 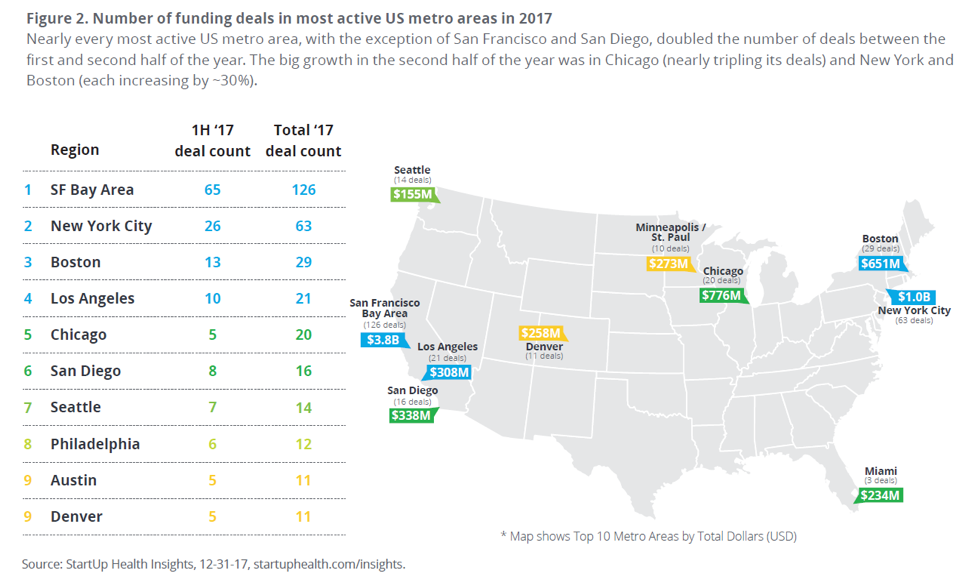 As previously shown in Figure 1, significant capital began being injected into the health tech market in 2014, leading up to a record year in 2017.

Pent-up demand and low interest rates have likely driven much of this activity, with the lion’s share of investment funding in 2017 going to health techs focused on consumer health information, clinical decision support/precision medicine, fitness and wellness, disease monitoring and diagnostics, and non-clinical workflow, as shown in Figure 3 below, also based on the Rock Health report.

Why such an influx? From the perspective of private equity and venture capital investors, health care has long trailed other industries in using technology consistently across the care continuum. Even in the face of government and consumer encouragement to migrate to electronic records and other digital technologies, many incumbent companies appear to have been wary of cannibalizing their other sources of revenue by developing new digital capabilities. That has likely contributed to the creation of the aforementioned white space—one that new entrants and disruptive technologies are eager to fill. 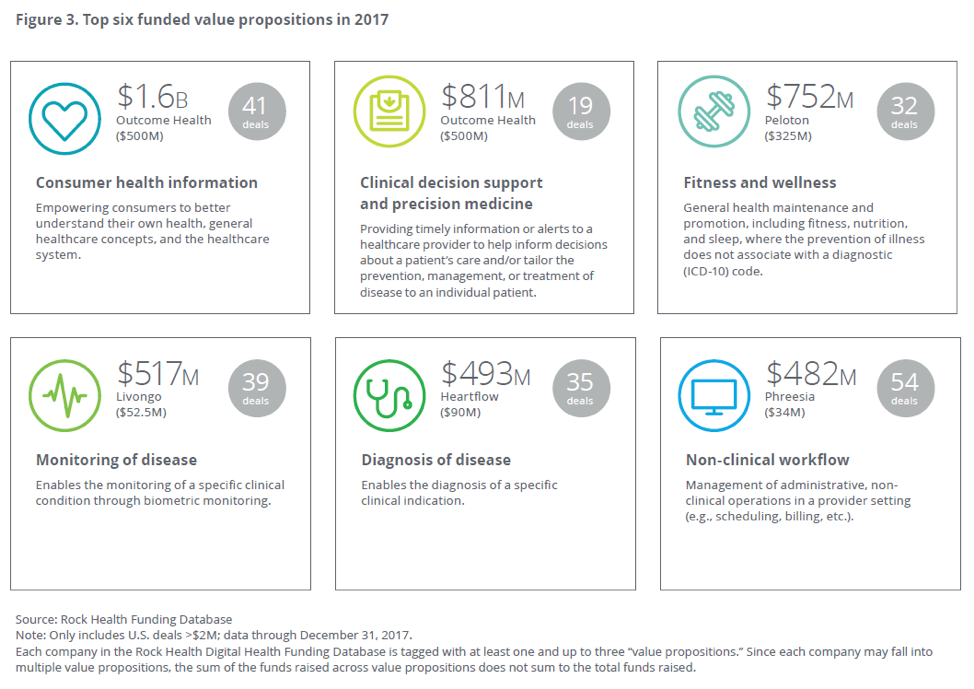 Some implications of health tech disruption

The continued maturation and vibrancy of the health tech sector has important implications for incumbent companies. One is the broad change in ecosystems caused by health tech companies, which impacts both incumbents across sectors and even health techs themselves. Beyond a company’s supply chain, its ecosystem includes any person or entity that it interacts with: staff, customers or patients, suppliers, affiliates or alliances, regulators…the list goes on and on.

In the future, the number of entities in the health care company ecosystem could expand exponentially. The interconnectedness of that ecosystem—its strength driven in part by technology—is increasingly likely to become a key factor affecting operational and financial performance. Companies will want to consider testing the integrity of their ecosystems to determine if all participants are aligned on the same set of values or mission as the core company.

The reality is that upstarts can be expected to appear wherever there is friction in the ecosystem. Consider that five of the eight largest funding deals in 2017 involved health techs specializing in consumer health information (see Figure 4 below), perhaps a natural result of individuals and families shouldering an increasing amount of responsibility for their health care. Incumbent firms should carefully consider who their customers are, where their competition could come from, and what’s keeping other organizations from taking their business away. 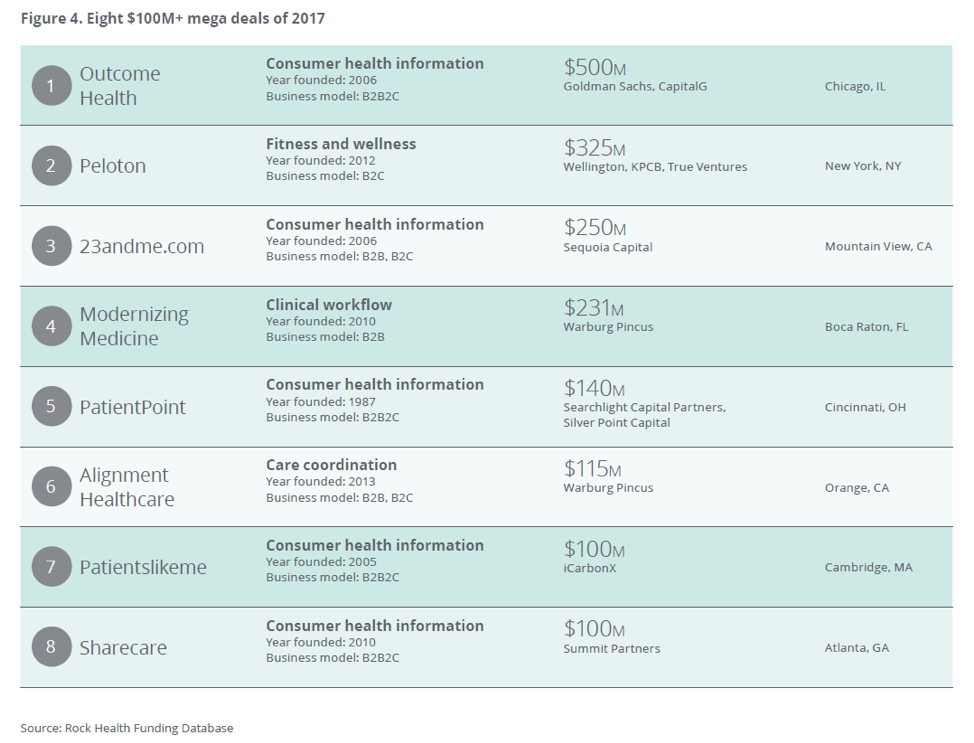 These questions should interest participants in the industry including incumbents, nontraditional entrants, investors, and health techs themselves. The disruption caused by technology-driven entrants to the health care industry appears to be creating significant opportunities for incumbents to reinvent themselves, for entrepreneurs and investors to carve out new spaces in the market, and for nontraditional companies to enter the space and grow. If the dearth of IPOs continues, M&A activity could pick up as health techs mature and investors seek to exit.

Being prepared is key. Having an effective management team in place, along with appropriate systems, processes, talent, and governance will be critical. The ability to focus on and support the mission and goals of the organization is key, as is the increasing need to measure operational performance from a broader ecosystem perspective rather than the traditional business unit perspective. For those health techs that find the right formula, the future is likely to be very bright indeed.

Pfizer partners with Medochemie to make drugs in Vietnam

Majority wants Medicare to be able to negotiate drug prices

Sidestepping the system – Is D2C the next winning model in healthcare?

Biogen’s Spinraza, Fosun-Kite’s Yescarta and a controversial Alzheimer’s drug: All you...