Lorelei wearing a arm brace made with lego bricks used in testing phase.

One of the more emotional moments at the HLTH conference came when father/daughter R&D team, Bodo and Lorelei Hoenen, described their efforts to build a robotic exoskeleton. Hoenen founded Dev4X, but this story is more about Lorelei.

Three years ago, when Lorelei was five, she developed a rare form of paralysis. By the time she was admitted to the hospital, she had lost all strength in her left arm and was having trouble moving, speaking and breathing.

Initially, Lorelei’s providers could not figure out what was wrong with her, and they weren’t particularly communicative with her parents.

“This was a pretty scary moment for us,” Hoenen said, “and it felt like they were just telling us to sit, be quiet and do as I tell you.”

Eventually, Lorelei was diagnosed with acute flaccid myelitis, a condition that causes spinal cord inflammation. Hoenen consulted with experts and reached out to other families who had received the diagnosis. The doctors told him Lorelei was going to be fine, but his independent research told him otherwise. Many of the families he contacted had children who never fully recovered.

“There was this huge disconnect,” Hoenen said. “On the one hand, our doctors were saying don’t worry, she’s young enough, she’s going to bounce back. On the other hand, the parents were saying their kids are still in the hospital or have paralyzed limbs.”

Dissatisfied with the answers they were getting from their medical team, Hoenen and Lorelei started researching ways to help overcome the ongoing paralysis in her arm, looking at robotic exoskeletons that could sense nerve signals to muscles and move frozen limbs. In some cases, these exoskeletons could even support rehabilitation and help restore function.

The family couldn’t afford one of these devices – and the companies didn’t want to share proprietary technology – so the Hoenen’s decided to build one. They just didn’t really know how to do it.

They decided on a 3D printed brace with an actuator and sensors. When they got stuck – which was often – they posted short videos to YouTube, describing their problems and asking for help. Engineers and other experts responded from Germany, South Africa, Canada, Mexico and the U.S.

“We started to really enjoy the process,” said Hoenen. “Instead of coming home and doing homework…we worked on this project.”

They built a number of prototypes with toy bricks and Velcro straps and, to their surprise, the system started working. The one persistent problem was converting Lorelei’s brain signals into arm motion. Because the signals were so weak, the sensors had trouble picking them up. However, if they made the sensors too sensitive, they could be triggered inappropriately. The crowd-sourced solution was using multiple sensors and training them to specifically recognize nerve signals coming to Lorelei’s arm. 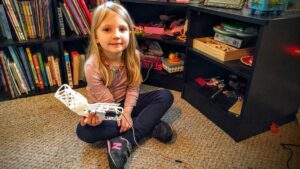 The design worked and other parents in the acute flaccid myelitis community started building exoskeletons of their own. The Hoenen’s helped with step-by-step instructions.

But the technology worked even better than they could have hoped. The following Christmas, Lorelei came into the kitchen without her brace.

“She says, ‘guess what I can do,’ and she goes ahead and starts using her arm,” said Hoenen.

On the HLTH stage, on cue, Lorelei, who stood beside her father wearing her brace and reading her lines as part of her presentation, took it off and flexed her once fully paralyzed arm.

The duo received a standing ovation.