Separate announcements from Apple and the Department of Veterans  Affairs on Wednesday mean that veterans will now be able to access their VA health data through Apple’s personal health record.

The two organizations made the news on the eve of Veterans Day. The data that veterans will be able to see include allergies, conditions, immunizations, lab results, medications, procedures and vitals, according to a news release from the VA.

“We have delivered Veterans an innovative new way to easily and securely access their health information,” said VA Secretary Robert Wilkie, in a statement. “Veterans deserve access to their health data at any time and in one place, and with Health Records on the Health app, VA has pushed the Veterans experience forward.” 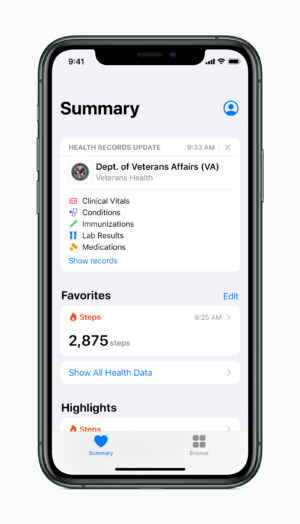 The announcement marks the fruition of a deal dating back to February when it was first revealed that Apple would soon bring this capability to veterans using iPhones. In February, the VA began allowing outside developers and private organizations access to its Veterans Health Application Programming Interface (Veterans Health API). The API was built to help encourage the creation and deployment of novel digital applications that help veterans get their health records in new ways. The VA noted that the API has more than 2,000 users.

Apple’s partnership with the VA is evidence of the technology giant’s effort to push forward on its personal health record initiative with the largest integrated healthcare system in the country. In its news release, Apple highlighted how the VA provides “service to more than 9 million veterans across 1,243 facilities, including hospitals and clinics.”

Other health systems and healthcare organizations using Apple’s Health Records number more than 400 and include the likes of Johns Hopkins, University of California San Diego, UC Health, Quest Diagnostics, Allscripts and others.

Apple’s Health Records is also buoyed by the fact that users seem to like it and find it helpful.  An early study conducted at UC San Diego to evaluate how effective the technology is found that 90 percent of survey respondents said it facilitated better health information sharing and understanding of their health. That prompted UC Health system to expand Apple Health Records access to its entire patient population of 5 million.

With each announcement related to the availability of its Health Records to more and more people, Apple seems to be winning a battle where many big names have faltered. Personal Health Records have always sounded good in theory but failed in reality. Back in 2012, Google announced that it was no longer going to offer its Google Health personal health record. Seven years later, Microsoft came to the same conclusion announcing in April that it would shutter its Microsoft Health Vault offering as of Nov. 20.

Those solutions were largely web-based and failed to scale with low-user adoption plaguing both. By contrast, the iPhone is fairly ubiquitous and with people more and more attached to their smartphones, perhaps Apple’s PHR will pave the way for users to get their health data on the device they use a lot on any given day.

The VA, however, is not just content to allow this capability on iPhones, noting that it intends to participate with other organizations to bring the same capability to other mobile platforms. Samsung, Google Pixel, OnePlus, anyone?