As the Covid-19 pandemic takes hold in the U.S., hospitals are deploying tech to battle this novel coronavirus that has been billed by the former FDA commissioner as a once-in-a-generation pathogen.

As of Monday, the Centers for Disease Control and Prevention said 68 U.S. deaths had been attributed to the disease. Though most cases caused by Covid-19  are mild, older patients and those with chronic conditions are at-risk. While some hospitals have wielded telehealth tools to fight the contagion, many of their peers don’t have robust telemedicine programs in place.

Technology can’t solve every problem posed by the new virus, but it can be an important tool in quickly triaging sick patients and helping supplement a workforce of healthcare providers that’s been stretched thin. Hospitals facing limited budgets and restrictions on telehealth coverage have had to find creative ways to implement these systems.

For many of them, the challenges boil down to insurance coverage and reimbursement policies, which can vary wildly from state to state.

“A state with more broad telehealth policies, especially in their Medicaid program, might have more telehealth programs in their hospital or clinic. They might be more robust,” said Mei Kwong, executive director of the Center for Connected Health Policy.

For example, 36 states have laws that require parity, or for private insurance companies to cover telehealth the same as they would an in-person visit, according to data from the American Telemedicine Association.

On the other hand, many states still restrict telehealth coverage based on the type of visit and who is providing care. Fourteen states will only reimburse for video visits under Medicaid, ruling out the possibilities of messaging and other “asynchronous” communications.

States with some of the most restrictive telehealth policies include: 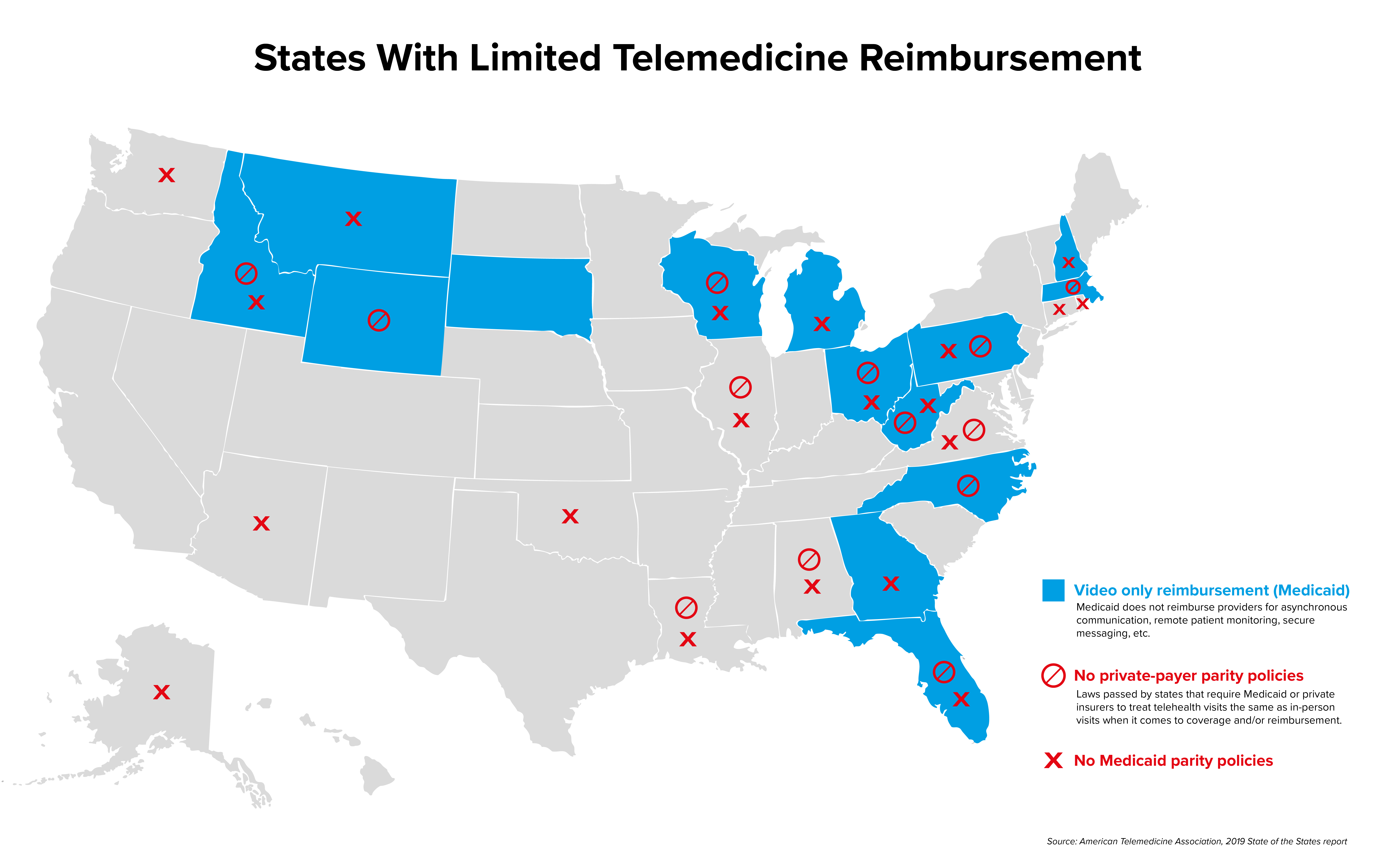 Map by Niki Forner. Data from the American Telemedicine Association, State of the States Report, 2019.

States may move in the coming days to make regulatory changes that would free up restrictions on telehealth coverage.

Since President Donald Trump declared a national emergency on Friday, states can apply for Medicaid waivers to streamline enrollment and licensing requirements for providers.

HHS Alex Azar also waived Medicare’s telehealth restrictions on Friday, which would open coverage to seniors in cities, not just rural locations. The change would open telehealth to a much wider group of patients, though hospitals are still awaiting guidance from CMS on how it will be implemented.

Some private health plans, such as Aetna and BlueCross BlueShield, have also said they will reimburse for telehealth, though the details are not yet clear.

“I also have to say, it is developing so rapidly, everybody’s just trying to keep up,” Kwong said.

At UCSF Health, Director of Telehealth Programs Linda Branagan said the hospital was able to repurpose a flu symptom checker to screen for Covid-19. The San Francisco-based health system has also been directing immunocompromised patients to video visits when appropriate, to minimize potential exposure to the virus.

“Telehealth  is a must-have for us, but that’s easy to say that because we already had it. We have only rapidly expanded what was already in place,” Branagan wrote in an email. “I have gotten calls from colleagues at other health systems that are behind the gun, hoping to get going with telehealth in the face of a looming crisis.  They are in a much more difficult position than we are.”

Reimbursement from payers is often limited, whether the funds are coming from a private insurance company or federal programs.

“The biggest challenge has always been the inconsistency among payors when it comes to reimbursing for telehealth,” Branagan wrote. ”We are fortunate in California to have always had good telehealth parity laws, but until Medicare broadly reimburses for care provided via telehealth to patients in their homes, it will remain difficult for health systems to widely adopt.

Preparations in Paradise
For groups that don’t already have telehealth in place, working with a private partner might be an option. After wildfires devastated the town of Paradise, California in 2018, Paradise Medical Group rebuilt its practice. As part of that effort, the primary care group worked with Teladoc and Blue Shield of California to create a telehealth tool called PMG Connect.

But these things still take time — Paradise Medical Group President Richard Thorp said it took about six months to build out the new program, a rapid timeline from their perspective. For practices that are just now starting, it will be a challenge.

“Now, as we are facing the Covid-19 outbreak, we already have these tools in use and we are marketing it as our way to connect with patients who are needing to connect with the practice regarding their current concerns of Covid-19,” he said.

“Everybody’s having hard times”
In Pennsylvania, which still has no laws on whether telehealth must be covered, Jefferson Health has tapped its existing systems to prepare for Covid-19. Its hospitals are offering on-demand visits with primary care and emergency medicine physicians.

Dr. Judd Hollander, senior vice president of healthcare delivery innovation at Jefferson Health, said the Philadelphia-based system had seen “through-the-roof” volumes for its on-demand telehealth service. In person, the health system is seeing about as many patients as it did through flu season.

“We are trying very hard to message, don’t go to the ER unless you need emergency care, or else you risk your own health,” he said. “If all they have is a cold, they don’t want to be exposed to Covid-19.”

The health system also offers a scheduled video visit program, for people managing chronic conditions, such as diabetes or hypertension, giving them the opportunity to do routine check-ups at home. The demand for that program has increased threefold.

“We barely have the message out that this is what we want people to do and people have found it,” he said.

Though Pennsylvania’s telehealth laws are fairly restrictive, the hospital has had a telemedicine plan in place since 2015. Two weeks ago, more than a dozen providers used it.

“We also had a bunch of providers that wanted nothing to do with telemedicine. They have jumped on the bandwagon very, very fast,” Hollander said.

However, the hospital has faced some challenges in getting reimbursed for its visits. Some insurance companies in the area, such as Aetna, cover telehealth services. Others, Hollander said, are still thinking about it.

“Everyone’s having hard times. We need payers to actually pay for care we’re rendering for telemedicine,” he said. “There’s no time to think about it.”

Many hospitals and physician groups will face a tough road ahead. But as Paradise Medical Group’s Thorp said, tools from one crisis may prove useful in the future.

“What we found is that we adopted it after the Paradise Camp Fire and that crisis, but it has now prepared us to handle difficult situations much more capably than we could have done before,” he said.

MedCity Pivot Podcast: How a female biotech CEO is developing a novel therapy while committing to a diverse workforce

What does 2019 have in store for healthcare innovation?

Why the next generation of remote patient monitoring holds the key to a new...

MedCity Pivot Podcast: How a female biotech CEO is developing a...