Monitoring a stroke patient or one with a traumatic brain injury in a hospital often involves observing them in ICU for signs of deterioration.

CT scans or MRIs are great for providing information about the brain but are not designed or capable of performing ongoing monitoring in the neuro ICU  and as such not helpful for admitted stroke patients or traumatic brain injury patients,  said Geoff Klass, CEO of Sense Neuro Diagnostics. Keeping them in this setting is also extremely expensive.

This is where the Cincinnati, Ohio-based startup hopes to make a meaningful impact in making decisions about stroke patients more efficient and evidence-based. Sense Neuro took part in the medical devices pitch track at the annual MedCity INVEST conference (held virtually in July) and was chosen as the track winner by the three judges — Amy Kobe, vice president at Baird Capital; Garheng Kong, founder and managing partner at HealthQuest Capital and Tom Shehab, managing partner at Arboretum Ventures. 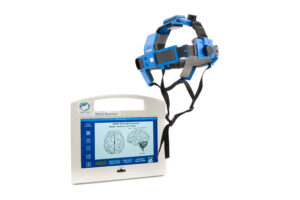 The company is developing a head-worn medical device that uses RF technology to look for worsening bleeds in the brain.

“The difficult part is that you have an ongoing condition and that condition could be worsening but you don’t know it because the outward signs aren’t presenting,”  Klass said. “A bleed could be expanding but outwardly you haven’t changed. You are pretty with it and it’s not until things have gotten very bad that [providers] realize, ‘Oh my god. We’ve got to do something here.” But through our ability to monitor, we can alarm and then react to that declining position much earlier than is now possible.”

Through the device,  electro-magnetic (EM) pulses in the RF range are passed across the patient’s brain. Depending on the tissue it hits, those waves and get scattered and absorbed, and Sense Neuro’s algorithm can calculate it and say whether there is a large blockage or small or none, Klass explained.

“The important thing to is to show the hospital that by doing the continuous monitoring and understanding of patient conditions — if they haven’t worsened in those first 24 hours — you can confidently move them out of the neuro ICU into a stepped down unit much earlier than in the past.”

And obviously this would save the hospital a significant amount of money, Klass said.

The company is on the cusp of a clinical trial to garner safety data and measure its results against a CT scan but Covid-19 has intervened to delay the start. Klass said he hopes for a September start to the first part of the pivotal trial where he expects to enroll 50 patients across five sites. After this first phase and submission to the FDA, he hopes the second phase of the pivotal trial can kick off in March in Delhi, India’s capital city.

“India is very interested in getting this done because stroke is the no. 2 cause of death in that country and for traumatic brain injury there are 500,000 who die of a TBI in India,” he said.

Aside from the in-hospital wearable device, Sense Neuro is also developing a miniaturized wearable device for use in-the-field. Given that the accurate diagnosis of stroke and the following 24 hours is crucial, he is confident that the in-field version will find many takers though a separate trial will be needed. The company is currently seeking $7 million in a Series B funding round, of which the Sense Neuro has already secured $2.5 million. Previously, the company has raised $1.5 million in NSF and SBIR grants as well as $1.2 million in a Series A round. The company’s investors are Queen City Angels, Strategic Neuro Physician Investors and Accelerant Fund.

Meanwhile, Sense Neuro has several competitors in the space – Cerebrotech Medical Systems, Forest Devices, Medfield Diagnostics and NovaSignal (formerly known as Neural Analytics). These are either narrowly focused on stroke detection or in the case of NovaSignal on gathering brain health data.

Not surprisingly, Klass said that there are several areas that distinguish Sense Neuro from these other companies. Several of them are focused on a device meant to be used in the field and not for ongoing monitoring of patients with stroke or traumatic brain injury. Separately, Sense Neuro diagnostics looks at a broader range of stroke patients.

“Much of our competition is limited to the detection of a large vessel occlusion, which is one-third of the stroke puzzle,” Klass declared.

Are you prepared for a post-pandemic surge of PDPM audits?

Is Walmart on pace with its former health’s chief’s vision?