After more than a decade and tens of millions of dollars directed at funding various research initiatives, Catherine Ivy said she was frustrated at the simple lack of progress made against the disease.

Through her activities as head of the nonprofit Ben and Catherine Ivy Foundation, Ivy has become one of country’s leading funders of brain cancer research.

“I know our funding has contributed to biology books and basic research, but I’ve invested over $90 million and still people aren’t living longer,” Ivy said.

“To me the first step is we’ve got to get patients living longer to figure out this disease. For clinical trials, if you can figure out whether your first choice is working in a day versus four months, it’s such a game changer.” 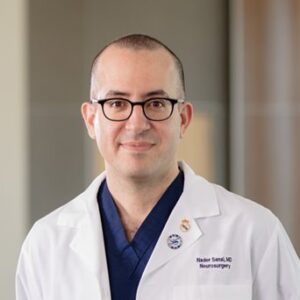 Here’s how the Ivy Center’s process works. Patients who have been diagnosed with malignant brain cancer and undergone the standard of care – which includes tumor removal – have their tissue sequenced by researchers to understand what drug or drug cocktail may work on their disease.

Then 24 hours before the removal of a recurrent tumor, patients are given a microdose of the therapeutic as a Phase 0 study. The tumor is then surgically excised and analyzed to see if the medication was absorbed and is reacting in the expected manner.

If there are positive indications, the drug combination is upped to a therapeutic dosage and tested on the patient in a Phase 2 trial.

“Ninety-nine percent of the time now the doctor starts with the drug, instead of the patient. This is a little more customized based on a patient’s genetics,” Ivy said.

Ivy said the second surgery to remove a tumor is typically covered by insurance, but all other costs (aside from travel to the center) are paid for by the Ivy Foundation.

The Ivy Center’s location at the Barrow Neurological Institute – one of the highest volume operative brain tumor centers in the country – provides researchers significant patient volumes with which to perform trials.

In most cases, the drugs trialed by the Ivy Center are combinations of therapeutics that are in development for other cancers, but haven’t yet been approved.

“There’s a lot of different classes and types of drugs being developed for cancer, but many times these are not tried in these populations,” Sanai said.

Drug categories tested by the Ivy Center include targeted inhibitors and biologics, with increasing focus on cell therapies, checkpoint inhibitors and immuno-oncologics.

“We’re pretty agnostic to the type of drug we test as long as we feel like its a new mechanism that hasn’t been trialed before for this patient population and there’s some sound scientific rationale that this drug could work,” Sanai said.

Glioblastoma is one of the most aggressive and fastest developing forms of brain cancer. Notoriously difficult to treat and almost invariably fatal, research into an effective treatment has been saddled with setbacks.

Just this month, Bristol-Myers Squibb announced the failure of a trial for its Opdivo immunotherapy drug, which was being used in combination with radiation therapy to target glioblastoma.

Glioblastoma was the condition that led to the death of Sen. John McCain in 2018 and fourteen years ago took the life of Catherine Ivy’s husband, businessman and philanthropist Ben Ivy.

Between 1998 and 2014, 78 investigational brain tumor drugs entered advanced clinical trial evaluation and only three received FDA approval. Drugmakers have tended to shy away from pursuing drugs to treat malignant brain cancer because of that low rate of success, coupled with high development costs and small patients populations.

“For anyone in the field, what strikes them initially is the graveyard of failed therapeutics over the past thirty years, and the fact that you have a group of extremely smart resourceful and motivated scientists that just haven’t yet touched on durable treatments. As someone treating patients everyday it’s disheartening not to be able to offer them a precision therapy,” Sanai said.

“That was the concept behind the Ivy Center, we wanted to create efforts that would reduce the obstacles available for industry and drug development and getting new drugs to patients.”

Sanai pointed to a few key reasons behind the lack of progress in developing treatments for malignant brain cancers like glioblastoma. For one, the conditions are not as prevalent as other cancer types, which limits the resource and industry interest from pharma companies.

Additionally, cancers like glioblastoma are extremely genetically heterogeneous and its location in the brain raises the risk profile of the treatment and potential side effects. Sanai said one common issue his team has faced is when companies block access to therapeutics that researchers feel would be logical to try.

Clinically speaking, drug development for indications like glioblastoma are also stymied by the lack of available animal models and the challenge in penetrating the brain-blood barrier.

By addressing these issues patient by patient though its Phase 0 studies, Sanai said the Ivy Center’s approach means that researchers know within a week whether the drug or drugs are actually affecting a patient’s disease.

“This makes it a lot easier for them to take a drug on a trial knowing that this drug individually has the capacity to work and that there’s an opportunity to try a new treatment that no one with their diagnosis has had before,” Sanai said.

Since 2013 when Sanai initially launched his Phase 0 Clinical Trial Program, the center has helped to take around 150 patients through clinical trials. The influx of new funding from the Ivy Foundation has accelerated the pace of the program to help researchers perform up ten clinical trials annually, with about 20 to 25 patients per clinical trial.

“Our philosophy is that it is as important to fail fast as it is to succeed quickly,” Sanai said. “That means we focus on opening and closing as many trials as possible in each calendar year.”

Sanai said the Ivy Center’s efforts have made a difference for individual patients and has served to create direct clinical evidence on the ability of specific drugs to impact malignant brain cancers.

Ultimately, for Catherine Ivy, Sanai’s efforts has brought her a renewed sense of purpose to move the needle for advanced brain research in a non-incremental way.

“You have to bet on a horse and go for it,” Ivy said. “We have the advantage of being a private foundation that can take on risk and that’s what we’re doing. When this came about I felt hope again.”