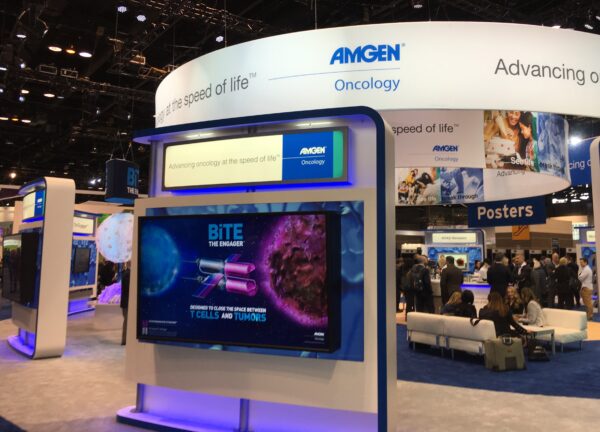 Amgen’s booth at the 2019 ASCO conference in Chicago

A leading contender in the race to develop drugs that target a type of commonly expressed mutation on cancer cells long considered “undruggable” has new data being presented at the American Society of Clinical Oncology’s annual meeting this month. But not everyone is impressed.

On Wednesday, Thousand Oaks, California-based Amgen highlighted two abstracts it would present on sotorasib, or AMG 510, an inhibitor of KRAS G12c, in colorectal cancer and also other solid tumors apart from non-small cell lung cancer (NSCLC), where it has the most data. KRAS G12c is commonly expressed in solid tumor cancers but has historically eluded drug treatment. The ASCO conference was originally scheduled to take place in Chicago, as always, but has been moved online due to the Covid-19 pandemic.

Shares of Amgen were down 1% in late-morning trading on the Nasdaq Thursday.

The CRC patients included 19 who had received a median of more than three prior lines of treatment and 25 who received the drug at the targeted dose of 960mg. At that dose, the median overall response rate and disease control rate were 12% and 80%, respectively. The three patients who achieved partial responses stayed in response for 1.5-4.3 months. Meanwhile, among all the patients, median duration of stable disease was 4.2 months. There were no dose-limiting toxicities or treatment-related toxicities leading to therapy discontinuation or death. The abstract stated that progression-free survival and overall survival would be reported.

Although both abstracts concluded that AMG 510 was well-tolerated and demonstrated clinical activity, some analysts were less impressed.

In a note to investors, Baird analyst Brian Skorney wrote that the data indicated a modest effect of the drug outside of NSCLC. On the one hand, the data for CRC represent an improvement over what was shown at the European Society for Medical Oncology meeting last year, he wrote, but AMG 510’s role in that disease still looks limited given its apparently limited single-agent activity. He added that the drug was “unimpressive” in the broader mix of cancers. At the ESMO meeting, data on 13 NSCLC patients who received AMG 510 at 960mg showed that seven – or 54% – achieved a partial response, while the remaining six achieved stable disease.

“While it is difficult to say with confidence the degree of effect AMG 510 is having, given the extremely small sample for any tumor type and uncontrolled nature of this study, it is unlikely that AMG 510 will have a broad effect across different tumors with the KRAS G12C mutation,” he wrote.

He also pointed to a number of competitors in the KRAS space, which include Mirati Therapeutics’ MRTX849, Boehringer Ingelheim’s pan-KRAS inhibitor BI1701963, Eli Lilly’s LY3499446 and Johnson & Johnson’s JNJ-74699157.